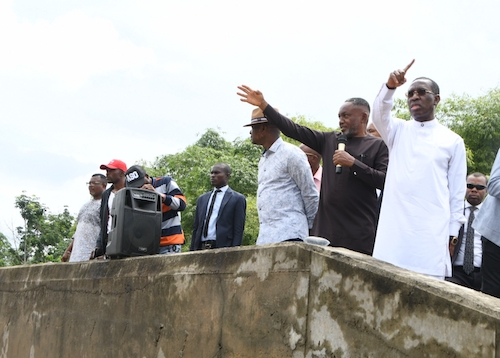 Okowa disclosed this to newsmen shortly after inspecting construction works at the bridge linking Ellu and Ofagbe on the road.

The governor, who was conducted at the site by the Commissioner for Works (Highways and Urban Roads), Mr Noel Omodon, said that work on the entire stretch of the project had progressed appreciably and expressed certainty that it would be ready for inauguration before Christmas.

He explained that the project was divided into three sections for ease of execution, adding that the bridge being constructed was to address the perennial problem of flooding on the existing bridge on the road which was usually flooded whenever it rained heavily.

“This is the site of the bridge; you will be wondering why the new bridge because there is an existing one here; the information we have is that when it rains heavily truly, this bridge stays under water.

“There was, therefore, the need to construct another bridge that is raised up and that is why you find the alternate bridge being constructed now.

“The alternate bridge being constructed is going to be 1.2 meters higher than this current bridge. I think that will take care of the flooding situation on the existing bridge.

“But this bridge itself is not going to be destroyed in anyway because during the dry season, it will still be useful but during the rainy season and dry season, this alternate bridge can be used at all times,’’ he said.

“So, hopefully, we will be inaugurating this project before Christmas, this year.”